Due to what, then, are we seeing a constant increase in the productivity of single-threaded programs? At the moment, we are at that stage in the development of microprocessor technologies, when the increase in the speed of single-threaded applications depends only on memory. The number of cores is growing, but the frequency was fixed within 4 GHz and does not give a performance gain.

The speed and frequency of memory operation is the main thing due to which we get “our own piece of a free cake” (link). That is why it is important to use memory as efficiently as we can, and even more so as fast as the cache. To optimize the program for a specific computer, it is useful to know the characteristics of the processor cache: the number of levels, size, line length. This is especially important in high-performance code - system kernels, mathematical libraries.

How to determine the characteristics of the cache automatically? (Naturally, cpuinfo is not considered to be parsed, at least because in the end we would like to get an algorithm that can be easily implemented in other OSs. It’s convenient, isn't it?) That’s what we’ll do now.

- the cache memory is divided into several “banks”, each of which functions as a cache with direct mapping, so the RAM line can be displayed not in the only possible cache entry (as it would be in the case of direct mapping), but in one of several banks ; the bank is selected on the basis of LRU or another mechanism for each line placed in the cache. 
To determine the number of cache levels, you need to consider the order of memory access, on which the transition will be clearly visible. Different cache levels differ primarily in memory response speed. In the case of a “cache miss” for the L1 cache, data will be searched in the following memory levels, and if the data size is larger than L1 and less than L2, then the memory response speed will be the L2 response speed. The previous statement is also true in general cases.

It is clear that you need to choose a test on which, we will clearly see the miss cache and test it on various data sizes.

Knowing the logic of multiple-associative caches working according to the LRU algorithm, it is not difficult to come up with an algorithm on which the cache "falls", nothing tricky is to pass along a line. The efficiency criterion is the time of one memory access. Naturally, you need to consistently apply to all elements of the string, repeating repeatedly to average the result. For example, there may be cases when the line fits in the cache but for the first pass we load the line from RAM and therefore we get completely inadequate time.

I would like to see something like stairs, passing through rows of different lengths. To determine the nature of the steps, we consider an example of line-passing for the direct and associative cache, the case with a multiple-associative cache will be the average between the direct-mapping cache and the associative cache.

Direct cache
Consider different line sizes. - Shows the maximum number of misses that the processor will spend to access the elements of the array the next pass on the line.

Therefore, in the associative cache, the step will be vertical, and in the direct cache, it will gradually increase up to a double size of the cache. Multiple associative caches will be the middle case, the “cusp,” if only because access time cannot be better than direct.

If we talk about memory, then the fastest is the cache, followed by the operational one, the slowest is swap, we will not talk about it in the future. In turn, different cache levels (as a rule today processors have 2-3 cache levels) have different memory response speeds: the higher the level, the lower the response speed. And therefore, if a line is placed in the first level of the cache, (which by the way is completely associative), the response time will be less than that of a line significantly exceeding the size of the first-level cache. Therefore, on the graph of the response time of the memory from the size of the line there will be several plateaus - a plateau * of the memory response, and a plateau caused by different levels of the cache.


For implementation we will use C (ANSI C99).

Quickly written code, the usual passage through the lines of different lengths, less than 10mb, performed repeatedly. (We will give small pieces of the program that carry a semantic load).

We look at the chart and we see one big step. But in theory everything turns out, just wonderful. So you need to understand: what is this happening for? And how to fix it?

Obviously, this can happen for two reasons: either the processor does not have a memory cache, or the processor guesses memory accesses so well. Since the first option is closer to fiction, the reason for everything is a good prediction of hits.

The fact is that today far from top-end processors, in addition to the principle of spatial locality, also predict arithmetic progression in the order of access to memory. Therefore, you need to randomize memory accesses.


After that, we surprised such a long-awaited "picture", which was discussed at the beginning. 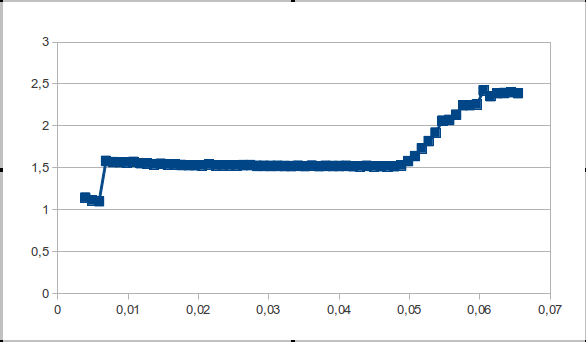 The program is divided into 2 parts - test and data processing. Write a script in 3 lines to run or run 2 times with pens yourself.


In general, I think everything is clear, but I would like to stipulate a few points.

Array A is declared as volatile - this directive guarantees us that there will always be calls to array A, that is, they will not be "cut" by either the optimizer or the compiler. It’s also worth mentioning that the entire computational load is performed before measuring time, which allows us to reduce the background effect.

The file is translated into assembler on Ubuntu 12.04 and the gcc 4.6 compiler - the cycles are saved.

The “take-off” points are the beginning of each rung. Also, before processing the data, it is necessary to remove single outliers that do not change the semantic load of the data, but create noticeable noise.


CPU / OS / kernel version / compiler / compilation keys - will be indicated for each test.

Let's talk about the "rake"


A rake was detected during data processing on the Intel Xeon 2.4 / L2 = 512 kB / Windows Server 2008 server processor.
The problem is a small number of points falling on the plateau exit interval - accordingly, the jump of the second derivative is invisible and is taken as noise.

You can solve this problem by the least squares method, or run tests in the process of determining plateau zones.

I would like to hear your suggestions regarding a solution to this problem.